"Coincidences" visit me often, this one is the best of all. After I photographed the cloud veiled angel, I went to Kinkos to blow it up to poster size.

I thought I saw a flaw in front of the face and this bothered me a little. That day I took a book off my meager bookshelf,

a book I had gotten from India on a trip there 20 years before. I don't ever remember actually reading this book, until that day.

The book THE CHAKRAS A MONOGRAPH By C. W. Leadbeater, is a thin 85 page book. Leadbeater was one of the founders of the Theosophical Society, and a clairvoyant. On page 55 I found this passage which explains the "flaw" in front of the angel's forhead :

When the sixth, between the eyebrows, becomes vivified, the man begins to see things....The centre between the eyebrows is connected with sight in yet another way. it is through it that the power of magnfication of minute physical objects is exercised. A tiny flexible tube of ehteric matter is projected from the centre of it, resembling a microscopic snake with something like an eye at the end of it. This is the special organ used in that form of clairvoyance, and they eye at the end of it can be expanded or contracted, the effect being th change the power of magnification according to the size of the object which is being examined........This little snake projecting from the centre of the forehead was symbolized upon the head-dress of the Pharaoh of Egypt, who as the chief priest of his country was supposed to possess this among many other occult powers. . . 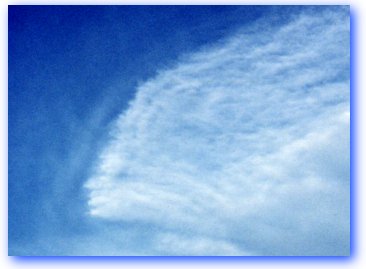 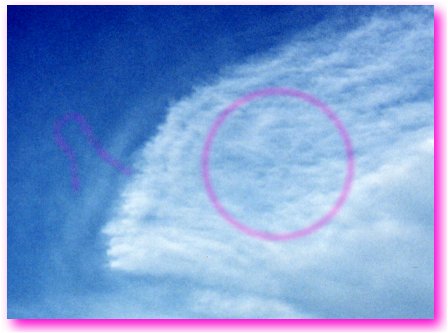 So this "cloud veiled angel" has this ethereal tube extention, which I've highlighted in the pink color so you can easily see it. If you have a hard time seeing it in the unaltered photo, also look at the second level aura (the darker blue shell around the angel) the tube is of the same material as that and thus is similar in color.
Also, in the circle in the back of the Angel's head is a floral pattern. This is evidently an energy chakral form, resonnating from the Divine Intelligence of the Angel.

Again I humbly say, this is a photograph of a Divine Being, an actual Angel. . . .this photo is really something, and for humanity a rare event for all to see with their own eyes, and for some with their clairvoyant sight as well. Seeing is Believing!!

Peace to you all,
David Hargrave Now, back to the cloud galleries home page.